There is now a post-it note stuck to my knitting bag with these words which shall serve as a reminder into all eternity: DO NOT KNIT FLAT.

I can't knit flat. I have no feel for it. I can follow a pattern okay, sort of, a bit, but I cannot just whip something up unless it's knitted in the round.

Case in point: a couple of weekends back, Bugheart and Grub were visiting. It was divine. Bugheart and I were sitting under a shady tree in the backyard, knitting happily. Well, she was knitting happily. I was fussing over my project because I was bored with the yarn, and longing to start a new project with some amazing rainbow-colored Misti Alpaca Handpaint sock yarn that's been flirting and winking every time I open the yarn cabinet. But I didn't want to make socks. What to do with just one big skein of silky alpaca sock yarn? Bugheart wisely suggested a shrug, because in the summer it's very hot and you don't want to carry around a sweater, but when you go into a building wearing a tank top, it's air-conditioned to Arctic temperatures and you could get frostbite on your shoulders. A shrug! Perfect.

I didn't see any patterns I liked. I became fixated on a specific stitch pattern that I wanted to use, and because all the patterns we perused were knit flat, somehow I became convinced that it had to be that way (silly, silly girl). So, despite the fact that I could not visualize the construction (bad, bad sign), I went ahead and cast on and started knitting the sleeves. Flat. Two of them. They are beautiful.

Then I connected them. Since I can only knit in the round (have I mentioned that before?), I connected them as if they had been knit in the round, and foolishly went about my business. Knitting, knitting, knitting, row after row of lovely, soothing, silken rainbow stockinette stitch. When it seemed about right, I sewed up the sleeves and tried it on.

That's when the beautiful silky rainbows came crashing down around me. Suddenly, my hours of denial became crystal-clear. It was too small, too short, too crooked, too crazy... just wrong, all wrong, and what's more the construction (had it only been knit in the round) was completely clear to me. And it had been all along - I'd just been knitting it flat with a circular construction on the brain. Oh, woe.

So I ripped it all apart and shoved it into a project bag and down to the bottom of my knitting basket, not to be heard from again until my jangled nerves have been soothed.

I'm soothing myself with a six-pack of New Belgium Mothership Wit and some adorable Anything Animals! I am in love. They are quick and easy, and though the pattern says to knit them flat I am knitting them in the round and they are wonderful. Adorable. Perfect. I may make a dozen of them before I even think about that shrug again.
Posted by f. pea at Wednesday, June 30, 2010 5 comments:

Yum. I made these for a bake sale, figuring there wouldn't be as many savory options. They were intended to be an accompaniment for beer, but I think they'd be great with a cold summer soup like gazpacho or chilled avocado soup.

First, grate the squash. Then put the onion, garlic and peppers into the food processor and chop them very finely. Saute the onion mixture in a skillet until the onions are starting to become translucent, then add the squash. Salt and pepper lightly, and saute for about 5 minutes until the veggies are tender. Set aside to cool.

Preheat the oven to 400 degrees, and prepare your muffin tins (you will need two).

Sift the flour, baking powder, salt and baking soda together in a large bowl.
In another bowl, beat together the yogurt, eggs and milk. Mix about half of the cheese into this bowl. Make a well in the flour and pour in the liquid. Mix with a few swift strokes until the wet and dry ingredients are just barely blended. Scatter the veggie mixture into the flour, and finish blending using as few strokes as possible.

Fill each muffin cup about 2/3 full. Scatter the remaining cheese over the tops of the muffins and then bake for about 20-25 minutes. The cheese will get wonderfully bubbly and just barely start to brown around the edges.


* Note on flour: I used a blend that was about 1/3 white flour and 2/3 whole wheat pastry flour, but you should use your favorite flour for savory muffins - I think wheat flour works nicely with these flavors.

Email ThisBlogThis!Share to TwitterShare to FacebookShare to Pinterest
Labels: food is my co-pilot 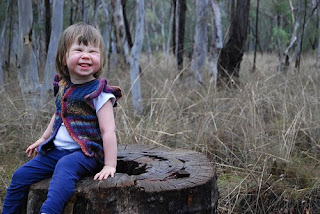 This is part update and part apology. I have finally corrected numerous errata in the Cowgirl Butterfly Astronaut Vest. Size 2 and size 4 had a few problems that involved my personal brain-block around simple arithmetic, and they have at last been remedied.

Many thanks to all of you lovely knitters who emailed or Ravelried me with your questions and workarounds (and your gentle "WTF??"s). You are much appreciated. If I were charging for these patterns, I could hire a technical editor. Alas, you are my technical editors, and your patience is a boon to all the other knitters out there who benefit from your trailblazing.

This little mash note really applies to all of my freebies. Knitters are really a kind and patient bunch. I can't tell you how much I appreciate your feedback on my designs, and I especially love when one of you not only finds an error, but tells me how you fixed it in your version. Open source knitting! If I can't sit around at the coffee shop (or the pub) and knit with you all, this is the next best thing.
Posted by f. pea at Sunday, June 20, 2010 3 comments:

Yes, it's me. It's been kind of quiet around here.

I seem to have misplaced my camera, so no pretty pictures to liven up this apologetic post.

I like making lists, so here's a list of what I've been doing since the last time I wrote:

I'm also reading Grendel by John Gardener, and making lists of unfinished projects that I swear I will finish this summer.

But not blogging, checking Ravelry, or otherwise spending much time on the internets. Hm. Well. What have you been up to?
Posted by f. pea at Tuesday, June 15, 2010 3 comments: