BOO! Bush announced his pick for the Supreme Court today, and my hair is standing on end. Thanks to Lori for sending me a feminist lawyer's summary of where Mr. Alito stands on issues of interest, courtesy of ThinkProgress.org. Scared yet? The fright fest continues...

_ ALITO WOULD OVERTURN ROE V. WADE: In his dissenting opinion in Planned Parenthood v. Casey, Alito concurred with the majority in supporting the restrictive abortion-related measures passed by the Pennsylvania legislature in the late 1980's. Alito went further, however, saying the majority was wrong to strike down a requirement that women notify their spouses before having an abortion. The Supreme Court later rejected Alito's view, voting to reaffirm Roe v. Wade. [Planned Parenthood of Southeastern Pennsylvania v. Casey, 1991]

_ ALITO WOULD ALLOW RACE-BASED DISCRIMINATION: Alito dissented from a decision in favor of a Marriott Hotel manager who said she had been discriminated against on the basis of race. The majority explained that Alito would have protected racist employers by "immuniz[ing] an employer from the reach of Title VII if the employer's belief that it had selected the 'best' candidate was the result of conscious racial bias." [Bray v. Marriott Hotels, 1997]

_ ALITO WOULD STRIKE DOWN THE FAMILY AND MEDICAL LEAVE ACT: The Family and Medical Leave Act (FMLA) guarantees most workers up to 12 weeks of unpaid leave to care for a loved one. The 2003 Supreme Court ruling upholding FMLA [Nevada v. Hibbs, 2003] essentially reversed a 2000 decision by Alito which found that Congress exceeded its power in passing the law. [Chittister v. Department of Community and Economic Development, 2000].

_ALITO SUPPORTS UNAUTHORIZED STRIP SEARCHES: In Doe v. Groody, Alito argued that police officers had not violated constitutional rights when they strip searched a mother and her ten-year-old daughter while carrying out a search warrant that authorized only the search of a man and his home. [Doe v. Groody, 2004].

Been thinking about getting an abortion, ladies? Emergency contraception? Better cash in on those privacy rights while you still can, because we have a new Supreme Court justice coming our way, and she ain't going to be no Sandra Day O'Connor. Think Scalia, pounding a bible.

With the Harriet Miers nomination, Bush's "just trust me" strategy fell flat with the extreme-right conservatives who take credit for his presidential victories. For them, it's time to pay the piper. While Bush probably believed whole-heartedly that his own attorney would have been an anti-abortion, pro-gun, born-again conservative vote on the Supreme Court, his people clearly missed the memo. Now they are clamoring for a nominee with an iron-clad conservative record, and based on reports about Bush's short list, they are likely to get it.

Add in some cuts in domestic spending: $2.3 billion dollars' worth, announced Friday, intended to free up government dollars to pay for post-hurricane rebuilding and spiraling war costs. What will those cuts look like on the ground? Think Medicaid. Think prescription drugs for seniors. Think child care programs. Think things are going to get much worse for us, women? Well hey, at least the Supreme Court nominee may be a woman. That would be gratifying.

Mid-term elections are coming up quickly, and this could be an opportune moment for progressives to swing into action and grab a significant number of seats in Congress while the administration is at its weakest point ever, with an abysmal approval rating of around 35% and the whiff of scandal hanging around it. What are you going to do about it, ladies? Well, okay, first stock up on emergency contraception. But after that?

It's not time for another Knit for the Cure, my friends. If you're not engaged in the feminist movement somehow, this is a great time to change that.
Posted by f. pea at Sunday, October 30, 2005 No comments: 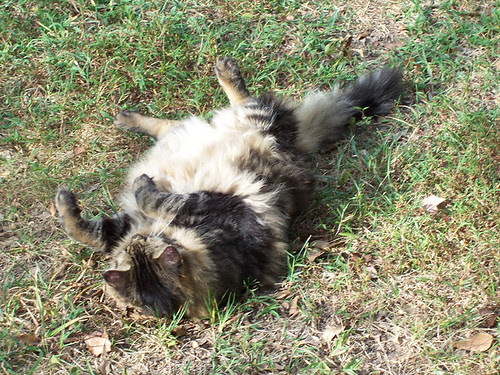 it always blows my mind how a trip through the washing machine on high agitation can change a ginormous shapeless thing into a tough little shaped item. fer instance: start with giant floppy sack. toss in washer. two times. pull out ball of fuzz. pound into shape. voila! stylish purse! i know there is physics in there somewhere, but the science (as usual) eludes me.

now designing, whoa, that is something else. the very idea of designing something felted is so overwhelming. so, i just made the aforementioned stylish purse. i wanted to design it myself, i really REALLY wanted to. but the maths and the felting of gauge swatches and the tremendous amount of planning and forethought involved were just exhausting, and no quanitity of chocolate croissants seemed to buoy me to the task, so once again i used some cute free pattern off the web and threw in a tassle. why yes, i designed it myself! am i not amazing??? 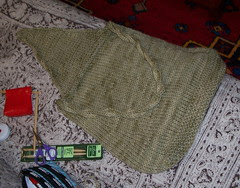 after felting: petite yet functional (yet blurry. sorry). 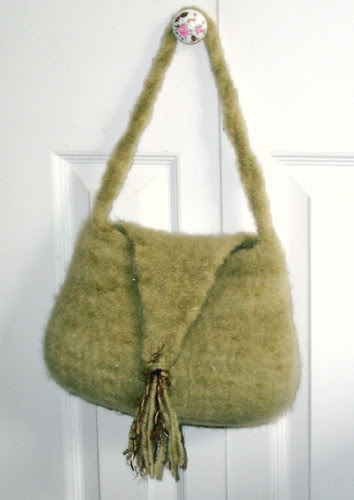 okay, really i'm still not sure how i feel about the tassle. would a big funky button be better? i just wanted to work in that chocoloate brown moda dea flip yarn because according to the newspaper lifestyle section (where the in-the-know get their fashion news), brown and green are THE COLORS TO HAVE this fall. and so i am hip. worship me and my felting prowess! but just maybe not my big 70's tassle.
Posted by f. pea at Saturday, October 29, 2005 No comments: 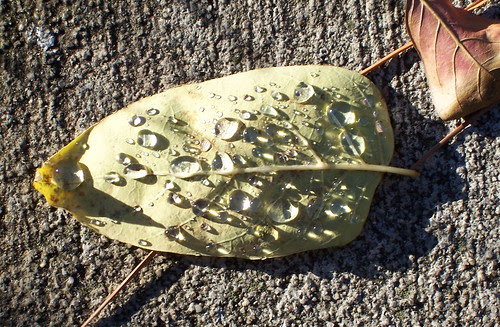 I took this picture today while walking to work. The leaves have hardly changed much yet here in balmy North Carolina, but the mornings lately are crisp and clear and full of saturated colors like the water droplets on this leaf.

Please don't take this the wrong way, car commuters, but I am really, really sorry for you. I know I'd get to work faster in the car, but then I'd have to burn gas, suck fumes and fight for parking EVERY SINGLE MORNING - and that's before even getting to work! How do you do it?? How do you sit in the traffic and stare at the Hummers without your heads exploding?

Here's my recipe for daily stress relief: get out of the car. Here in The Triangle, NC, we are fighting about whether to have light rail for commuters, whether anyone will take it because it might slow their commutes down by ten minutes, or somehow be "inconvenient." Ulcers are inconvenient, too, you know?

My favorite public transportation sagas are from Aunt Purl, who knits on the bus every day in L.A. since her car was stolen.

People get all irritated like I'm some kind of ultra-righteous freak with special powers of superhuman good luck when I mention that, at the age of 30, I have never driven a car to work in my life. Not to say that I never even did it once in bad weather (cause I sure have), but even here in the South where public transportation is considered a commie plot, I've always been able to either take the bus, ride my bike, or plain old walk and admire pretty leaves instead of getting in the car. I need it! I can't handle the car thing - I think you commuters must have superhuman powers of saintliness for not road-raging yourselves into the hospital, what with all those obnoxious SUV-drivers "sharing" the road with you. Do you meditate, or what?
Posted by f. pea at Tuesday, October 25, 2005 No comments: