what will I be? 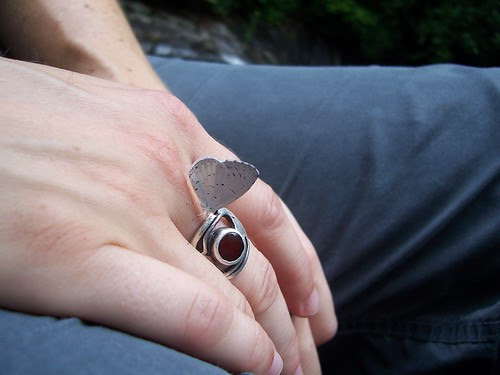 Because I haven't wanted to admit it to myself, I haven't really said anything about this before: Arthritis is hurting my hands and I can't knit much anymore.

If you don't knit (or crochet, or carve wooden decoys, or hand-quilt or something), this probably doesn't sound like such earth-shattering news.

I'm 38 years old. I was diagnosed with arthritis around the time I turned 30, but I think I've had it since adolescence. It's in all my joints, but it seems to concentrate on certain joints at certain times.

Since having Baby #2 just about a year ago, the arthritis has been concentrating on my hands. Some days the finger joints ache terribly and keep me awake at night. Some days they just feel tired, like your legs will after a long day of walking.

There's lots of good and bad advice out there about arthritis remedies. I've lived with this for a while now, so I've tried lots of things (other than the prescription drugs, in which I have no interest). Some work. Fish oil helps me a lot. Eating less dairy and sugar help a lot. Other things haven't helped me much.

Last winter I made myself a beautiful Lopi sweater that felt very much like a swan song. I knit it from beautiful, undyed, handspun yarn that I'd brought home from Vermont years ago and saved for a very special project. Though my hands ached and I could only knit one row some nights, I kept pushing through it, because I hardly ever make anything for myself, because I really really wanted to make this sweater, and because in the back of my mind I suspected this might be my final knitting project.

Since then I haven't quit entirely. I've made a couple of little baby gifts. Small things that don't take too long, even when you can only knit one or two rows at a time.

I hope that this is temporary. I hope that this is a period of the arthritis focusing on my hands, and that with enough fish oil and diet modification and targeted yoga the pain will mostly disappear from my hands, perhaps go torment some other joints and humble me in some new way I had not imagined.

In the mean time, I read. I devour books. I inhabit other worlds, where my hands fall away along with all my other disappointments and I am only consciousness - perhaps someone else's - and new stories constantly unfold. Thank God for books.

My Great Aunt Ruth was a voracious reader. My mother told me that Ruth was also an accomplished seamstress, and that she had the most beautiful handwriting, but by the time I knew her, Ruth's hands were curled into tight claws and her poor finger joints were swollen knobs that gave her no peace. She always sent birthday cards, and you never had to read the signature to know who had written such gnarled-looking letters.

I don't remember ever hearing her complain about what she could not do, though clearly she had had to give up many of the things that had once made her who she believed herself to be. I knew her as kind, insightful, gentle, meticulous and always elegant. She always wore a stylish blouse and a jaunty scarf or necklace, even for the most mundane weekday cups of tea with my grandmother.

I think about Aunt Ruth's hands a lot and wonder whether mine will someday be like hers, whether I will have to give up knitting and sewing, writing, drawing and planting tiny lettuce seeds in perfect rows in my garden. Or will I just leave my hands behind, the way I do when I'm engrossed in a really good novel, leave my whole body behind and be first and foremost a consciousness, a sentient being whose physical shortcomings (and physical abilities, for that matter) are no more relevant than the whine of a mosquito in one's ear?

For a long time I didn't say anything about this out loud, or even to myself much, because it was just too sad. Who am I, without the being able to make things?

But you know, we go through many metamorphoses in our lives. I have gone from child to adult, from unattached to lawfully wed, and from individual to Mother, whose own heart walks around outside her body in the shape of two growing little girls. I have gone from daughter-who-takes-her-incredible-father-for-granted, to woman-without-a-father. One day all these will change again. Some of these future lives I am terrified to contemplate. Some will bring more joy than I can imagine now. I'd always thought knitting would be at hand throughout. Perhaps not.