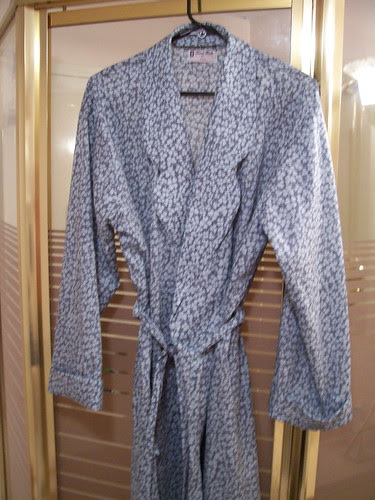 Here it is: the much-anticipated bathrobe.

I know I promised a saga, but it's really more of a tale of woe, so I think I won't bore you with all the grisly details. But here are just a few of the grisly details:
I got so wrapped up in making this thing that I sewed late into the night on Saturday... so late that I pretty much forgot we had houseguests coming. Houseguests that I needed to pick up at the airport.

They politely called after about a half an hour of waiting in the baggage area to see whether I was actually coming. Ha ha! Right! Yes! I'm on that! HWWLLB is a master of the quick tidy-up - by the time we all arrived back here, the place looked as if we'd been expecting royalty. Except that nobody had been to the grocery store for days, so the cupboards were a bit bare... but other than that, fit for a queen!

Thank heavens for sock monsters. This dang stiff-collared robe ate up most of my weekend (really, they call this an 'easy' pattern!) and made me swear I'd never touch my sewing machine again. But tonight we watched our friends' 5 year-old son J (they won tickets to the Carolina Hurricanes game on the radio! can you believe that?) and when he got here, he asked if we could make a sock monster. His mom told him about them, I think.

So we did. It was a good, crooked, crazed monster, because I had to pin and sew quickly so as not to bore J to death. He named it Candy Cane (for obvious reasons), did all the design work and some of the cutting. He also invented an awesome tail for this monster - you can see it peeking out from under C.C.'s legs. 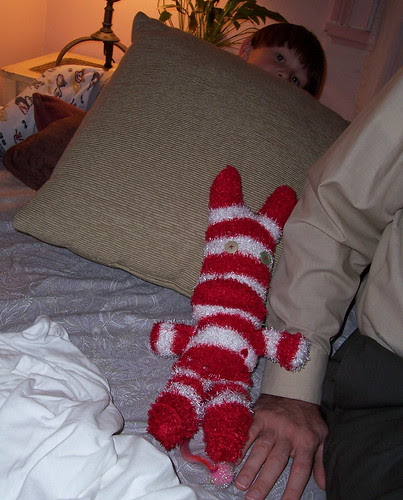 j is the one hiding behind the pillow while HWWLLB snuggles with candy cane.

Some of you have been asking about how to make these things, and even whether I would post a tutorial. The bad news is: no I can't. But you can learn how to make all different crazy kinds of sock monsters from John Murphy's wonderful book, Making Stupid Sock Creatures (check out his great gallery of Stupid Creatures here). The book is really well written with very clear step-by-step instructions - much better than any quick & dirty internet tutorial.

Email ThisBlogThis!Share to TwitterShare to FacebookShare to Pinterest
Labels: craftastic