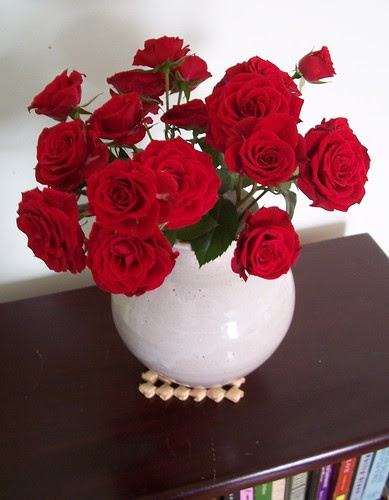 I feel like our team won the World Cup at work this week. We played a killer match this week against Team Evil Country (soccer fans - is there a team that is evil but very skilled? If so, that's who we played), and we won it 2-0. I'd like to carry the soccer metaphor on a little farther, but sadly my knowledge of sports is quickly exhasusted. But damn, we are good.

These are the roses that HWWLLB gave me earlier in the week to cheer me on.

We have been working on this crazy World Cup of Work for over 18 months now, and we are suddenly in a funny extended limbo between the moment that the final match ends, and the moment when the winner is officially declared, this small window of purgatory when it is both highly unlikely, and also terrifyingly possible, that some technicality or mistake could suddenly emerge and negate the results. Or just agonizingly delay them. So I'm trying not to think about that. 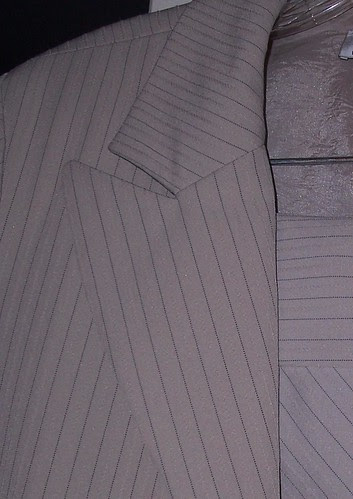 this is my lucky suit 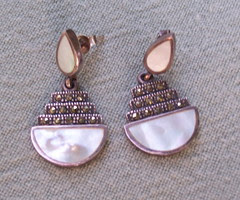 these are now officially my lucky earrings

I never used to be superstitious, but last week on a big day, I wore a black suit with a gray top and looked like I was going to a funeral. So did my colleauges. And it almost turned out to be our funeral. So this week, on the Very Big Day, I wore my lucky suit (the same suit I had worn for our first big match-up - against Germany maybe? - last year. In retrospect, it was a cake walk).

It's also a lucky suit because my friend Kim borrowed it once for her Very Big Job Interview, and she got the job. The earrings are lucky because they are beautiful and I found them a few weeks ago in my desk while rummaging for an empty jewelry box. I have no idea where they came from. And they go nicely with the lucky suit, don't you think?

After the big match, I was sure I would collapse exhausted on the couch, or tackle some exciting knitting, or want to go out and party, or just get really plastered at home, but instead I found myself scrubbing down the kitchen, vacuuming the house, and finally dealing with the mystery funky smell in the living room that had been plaguing us for months (as it turns out, one of the cats has been using the fireplace as a litterbox). I can't believe I used that burst of ecstatic energy for cleaning, of all things! There is a little of my mother in me, after all.

Tonight I am sipping tea and catching up on the Amazing Adventures of Billie and Heather, who are spending three weeks breaking hearts and chasing Billie's ancestry across eastern Europe. What a great trip! You can read Billie's travelogue here.
Posted by f. pea at Friday, June 30, 2006