Golly, could this November be any prettier? All day long it's sunny and breezy and not cool at all, crisp and bright in the morning and just cold enough at night to make you want to cook soup and drink red wine. So mostly I've been drinking red wine, but tonight I made a big old pot of vegetable soup to celebrate the completion of the legwarmers! Huzzah! I really like them. I like them so much it's going to be hard for me to give them away for the SnB fashion show/fundraiser, but as the Buddah teaches us, it's not good to be hung up on material stuff, so away we go. I also crocheted a flower lapel pin to go with them, but don't ask me for the pattern because I have no idea how I did it. Theoretically I don't even know how to crochet. My cousin's husband taught me how to make granny squares last Xmas, which I promptly forgot, but the knowledge seems to be slowly seeping back into my head. How does that work? Maybe it's that crocheting is SO EASY that you don't even have to know how to do it to do it. Crocheters? Any thoughts? 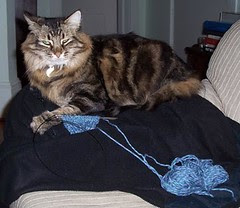 I know you want a legwarmer picture, but it's tough, really tough, to take a decent-looking picture of legwarmers while wearing them. Plus it's dark out now... but to placate you, here's a picture of Simon posing with one of the dozen or so beer cozies I'm knitting with the Magic Loop technique... I know, I couldn't stop myself. Everyone else was having so much fun without their double-pointed needles, I just had to join in. Plus I find the risk of ocular injury greatly decreased this way. Long live Magic Loop!

So anyhow, on Saturday HWWLLB and I went for a nice long stroll around Crabtree Lake. While we were walking, we startled a great blue heron, who made a noise like a pterydactyl/angry muppet as he flew off. They are such elegant-looking yet crazy-sounding birds. Last week there was an article in the paper that made me cry, about a guy rescuing a juvenile bald eagle at Crabtree Lake. This guy was amazing! The eagle was caught in fishing line and drowning and the guy actually swam out into the lake to save it! He took it to the Piedmont Wildlife Center who doctored it up, and it will be released back at the lake in a couple of weeks. It was a very moving article. Plus I cry at everything. Nothing like that happened while we were there Saturday, but don't think I didn't have my eyes peeled for dramatic wildlife action.

The real action over at Crabtree is what you can't see, because the lake is being poisoned by a steady trickle of PCB's from the old Ward Transformer site near the RDU airport. It's a Superfund site, except there isn't any more Superfund money to clean it up, since the republicans axed the tax on chemical plants that used to fund it, back in the old days when here in the US we did things like make the chemical companies pay for their own toxic clean-ups. So there are signs all around Crabtree saying how you can't fish there because the fish are full of PCB's. Unfortunately the eagles and the herons can't read those little signs, so they just keep on recklessly eating the fish from the lake. Someone should warn them.
Posted by f. pea at Sunday, November 13, 2005