Apparently some of you are lurking out there, never leaving comments. Never leaving a trace, like the careless wind. What I want to know is, are you for real?

But hey, I'd rather get a real postcard in the mail than a virtual comment on a blog ANY DAY. So, thanks Jay-sun! It was lovely to receive a postcard from far away, and funny that it contained about a week's worth of blog comments, written in a spiral so that you had to turn the card 17 times to read it. 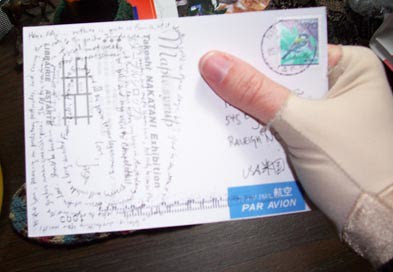 a postcard for me! 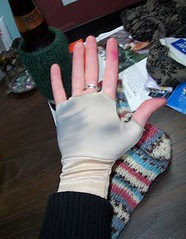 Jay-sun writes that perhaps I have been knitting my wrists off. As a matter of fact, I've been a little worried about that. My little spandex wrist-support doohickey is looking the worse for wear. Ick!

That's because I've been wearing it ALL THE TIME, because I can't stop knitting except to poop, shower and go to work. Yesterday my co-worker BK lent me her car to race home and get my knitting, when I realized that we were about to get on a 2-hour conference call and I didn't have it with me. I can't face conference calls anymore without knitting. BK was smart - she had remembered hers. She is making a pair of amazing brioche stitch fingerless gloves. They are hot stuff! Anyhow, I made it back just in time for the conference call, capelet-in-progress in tow. And thank goodness, because it was fairly boring, as conference calls go.

All the marathon knitting is taking its toll, though. My wrist problems really began about 8 months ago when the keyboard on my laptop died and instead of getting it fixed, I plugged in a cheapie peripheral keyboard, which was bad and evil and after a few months the wrist pain began. So I got the doohickey. And it helped. And I got my keyboard fixed, and shazam! all better. Then I went to this conference in Buffalo, where I knitted NON-STOP through 4 days of marathon meetings, and by the time I got home... ouch. Ouch! It hurts! But you can't stop me from knitting, Christmas is just 19 days away for crying out loud! So don't try. Thank you.

And now a plea... does anyone miraculously have a bit of this self-striping sock yarn hanging out in their stash? 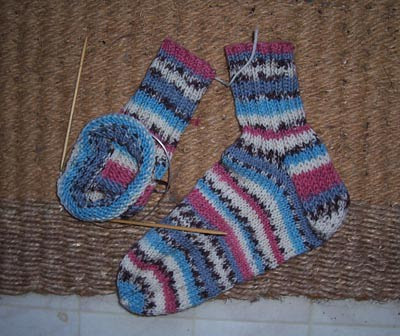 It's Strapaz Norweger Ringel, made by Steinbach Wolle. Ach, ich bin so dumm! Two weeks ago we happened to be passing through Greensboro NC, where one of HWWLLB's favorite quilting stores is located, and they just happen to sell yarn there, and they just happened to be having a 50% off all yarn sale, and I just happened to throw ONE SINGLE BALL of this sock yarn in my bag, and I just happened to knit a sock and a half with it before running out. And I love it! Look at the beeyooteeful fair isle fake stripes! So sweet and so easy, and so not available in Raleigh. Ugh. How I hate to buy a full-price ($10!) ball of this stuff and pay $5 shipping just to finish a couple inches of toe. And yet... that appears to be my fate. I violated the inviolable rule of buying enough damn yarn to finish the project. It's almost as bad as not gauge swatching.
Posted by f. pea at Monday, December 05, 2005