what's going on out there? 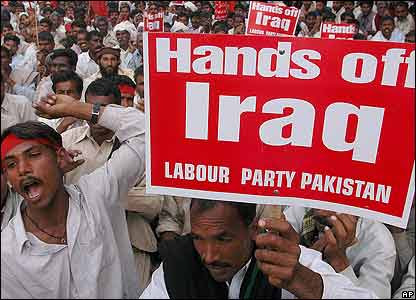 It's the third anniversary of the US invasion of Iraq, and I am spending the weekend commemorating the occasion with the stomach flu. Somehow retching and moaning seem to be a fitting tribute.

For an update from inside Iraq, visit the Baghdad Burning blog. She says it's the only "girl blog" from Iraq. I find it quite thoughtful and primarily concerned with how Baghdadis are experiencing the political situation on a day-to-day basis. In her latest entry, marking the third anniversary of the invasion, she tries to sum up why this year has been so much worse than the previous, and comes down to the new Sunni/Shia divisions in the country.

I read constantly analyses mostly written by foreigners or Iraqis who’ve been abroad for decades talking about how there was always a divide between Sunnis and Shia in Iraq (which, ironically, only becomes apparent when you're not actually living amongst Iraqis they claim)… but how under a dictator, nobody saw it or nobody wanted to see it. That is simply not true- if there was a divide, it was between the fanatics on both ends. The extreme Shia and extreme Sunnis. Most people simply didn’t go around making friends or socializing with neighbors based on their sect. People didn't care- you could ask that question, but everyone would look at you like you were silly and rude.

I had assumed that the foreign analysis she describes was accurate, and that the fall of the dictator simply unleashed these pent-up divisions. Instead, the author feels very strongly that the sectarian divisions developing among middle-class, educated Iraqis who, she claims, previously would never have expressed such views, are the results of carefully-planned campaigns by the same zealots who are perpetrating the escalating violence across the country. If she is right, then it seems what's going on in Iraq is not just the civil war that the US government so vehemently denies, but also a culture war.

It frightens me that not only are Americans getting only a tiny slice of the picture of what's really happening in Iraq, but that our leaders' views are similarly limited. Bush admits he doesn't even read a newspaper - any newspaper - except the sports page. How can we expect to find reasonable solutions to this horrible mess we've created when our leaders only hear what they want to hear about it?

I really appreciate this blog (Baghdad Burning) and generally speaking, would really like to get more news with broader perspectives. I like reading the BBC, and while it carries a very different view of the US and American policy than domestic sources do, the perspective is culturally still very close to our own. Not to mention that British and US foreign policy towards the Middle East are not so very different - especially, I'd reckon, when viewed from within the Middle East.