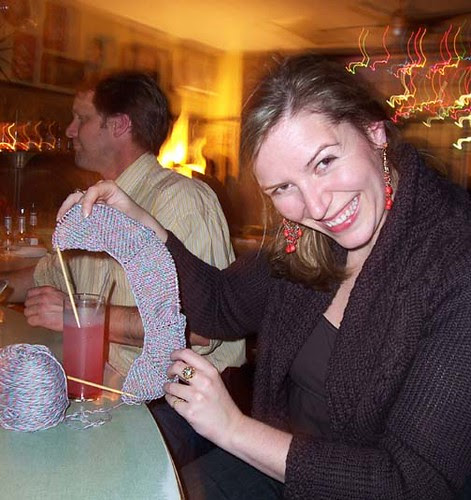 Since we don't have the teevee at our house, I didn't get to watch the actual olympic opening ceremonies, but I heard about the flaming ice-skaters on NPR. Here at Team My House, the casting-on ceremonies were squeezed in between a quick after-work dinner and heading over to a local venue to see several friends in a Raleigh production of the Vagina Monologues (it was fabulous, by the way).

I saw at least one other olympic knitter at the show last night (Saun) - she didn't have her project with her, because she is in such tip-top knitting shape that she doesn't need to drag it with her everywhere she goes (though she did admit to having some socks in her bag just in case). Getting a sweater done in 16 days is something she does twice a month anyhow!

At the other extreme, I knitted while we saved our seats, knitted during the intermission, and knitted at the bar afterwards. It's a good thing, too, because I had a change of heart about the edging this morning and frogged & re-knit about a dozen rows - twice. It's now five in the afternoon and I've just caught up with where I was at the bar last night when Flems posed with the yarn to show off my progress. Isn't she gorgeous? I wish I had even half her natural glamour!

I learned a lot about Flems last night, including that she too is pining for Jack White (of the White Stripes) and we almost got in a hair-pulling cat-fight over who would get the first crack at bearing his children, should he ever come sowing his wild oats in the Kackalack (they were playing My Doorbell at the bar, which triggered the pavlovian salivation response in both of us that touched off the unfortunate incident). Luckily our respective male companions (secure enough in their manhood not to be threatened by Mr. White) intervened, and it did not come to fisticuffs. Thank goodness.

I know that several of you are about to post comments telling me about Jack White's real life and how he's married and has an actual baby pending and all that. To avoid such future complications, you should know that I don't believe in the real lives of artists and celebrities. As far as I'm concerned, they exist soley for our entertainment and have no actual lives of their own. So don't sweat it - you can keep on fantasizing about Freddie Prinze, Jr., or Kai Ryssdal or Angelina Jolie or whomever else you're hot for because they are all yours, baby.
Posted by f. pea at Thursday, February 09, 2006